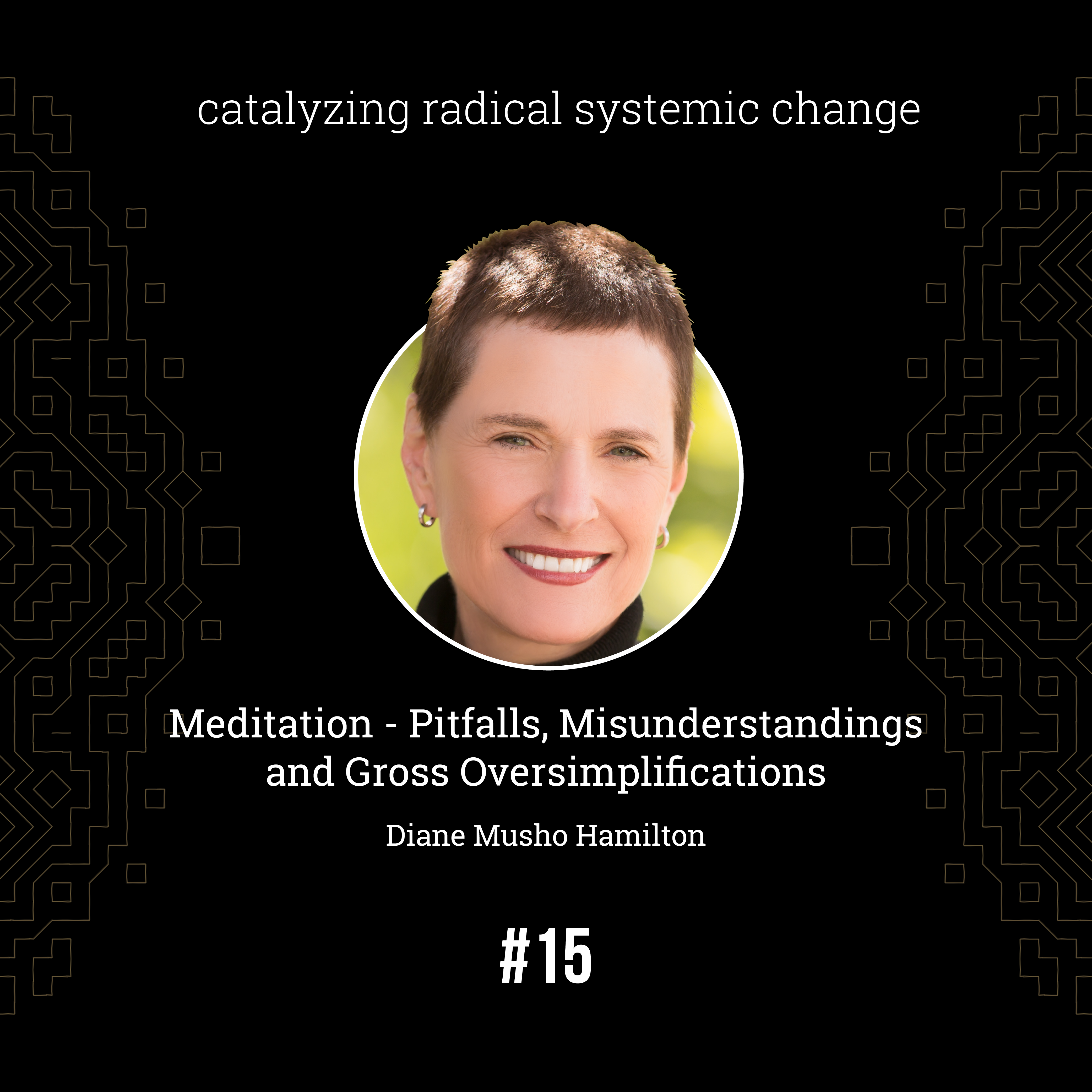 The market for spirituality is exploding. With massive second order effects kicking in like poor transparency, phony gurus, idolizing and sugarcoating spiritual bypassing. How can we ensure that we don’t use these ancient old techniques to build narcissistic super egos? What role does complementary shadow work play?

In today’s dialogue we dive into:

Four Definitions of “Spiritual” or “Spirituality”

Why is Shadow work so important?

is an author, award-winning mediator, and teacher of Zen. She has practiced meditation for more than 35 years.

Diane was the first Director of the Office of Alternative Dispute Resolution for the Utah Judiciary, where she established mediation programs throughout the court system.

She has mediated a broad range of disputes and transactions including divorces, probate, employment, contracts, and multi-party negotiations. She works with consummate ease in a variety of settings including private industry, governmental agencies and non-profit and of course individuals. She is well known as an innovator in dialogues, especially conversations about culture, religion, race and gender relations.

Diane has been a practitioner of meditation for over 35 years. Diane began her studies at Naropa University in 1983 with Choygam Trungpa Rinpoche, and became a Zen student in 1997. In 2003, she received ordination as a Zen monk with her husband Michael Zimmerman, and received dharma transmission from Genpo Roshi in 2006. For her, Zen practice is a fundamental commitment to experiencing reality as it is — beautiful, ungraspable and seamless.

Diane facilitates Big Mind Big Heart, a process developed to help elicit the insights of Zen in Western audiences. Diane is considered a pioneer in articulating and applying the insights of an Integral Life Practice based on the work of Ken Wilber. Since 2004, she has worked with Ken Wilber and the Integral Institute in Denver, Colorado.

In 2008, Diane co-founded Two Arrows Zen, a center for Zen study and practice in Salt Lake City and Torrey, Utah with her husband Michael Mugaku Zimmerman. She is the Executive Director of Two Arrows Zen and co-founder of the Integral Facilitator, a training program oriented to personal development and advanced facilitator skills. 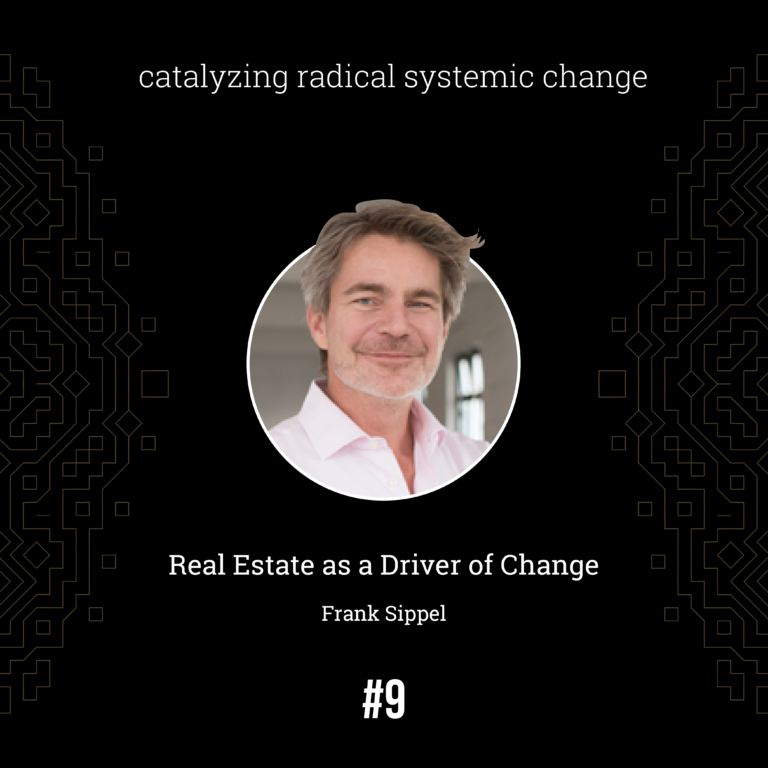 #9 Real Estate as a Driver of Change

The title seems almost a contradiction as we see the housing and affordability crisis mainly driven by extractive real estate business models in many metropolitan areas around the globe.
But this is not carved in stone. We can truly sense into the soul of a property and feel into what that space within its given surrounding really wants to serve for. And create the circumstances that enable a broad variety of stakeholders to cocreate a place full of abundance including the arts and take sustainability really to the next level. 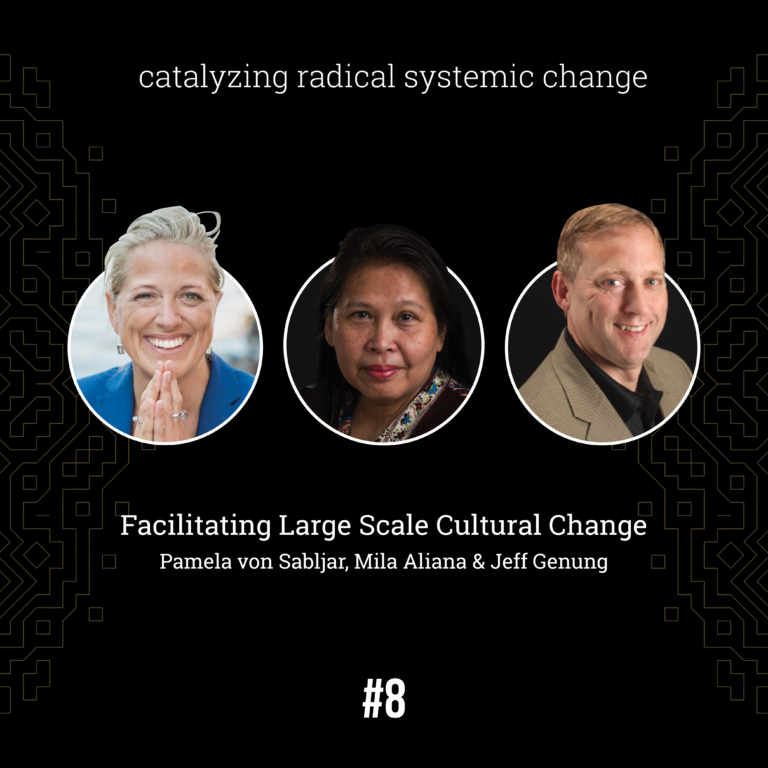 How can we facilitate the many chrysalis cells for the emerging, regenerative paradigm that are so far often not connected, when already aligning groups is quite challenging? We truly need groups of groups that share a common North Star, all while they still pursue their own goals, obviously. This is an undertaking that has never been done before on a global scale. But we know leaps in history are possible, from the abolition of slavery, the women’s liberations movement, the end of Apartheid, the fall of the Berlin wall. 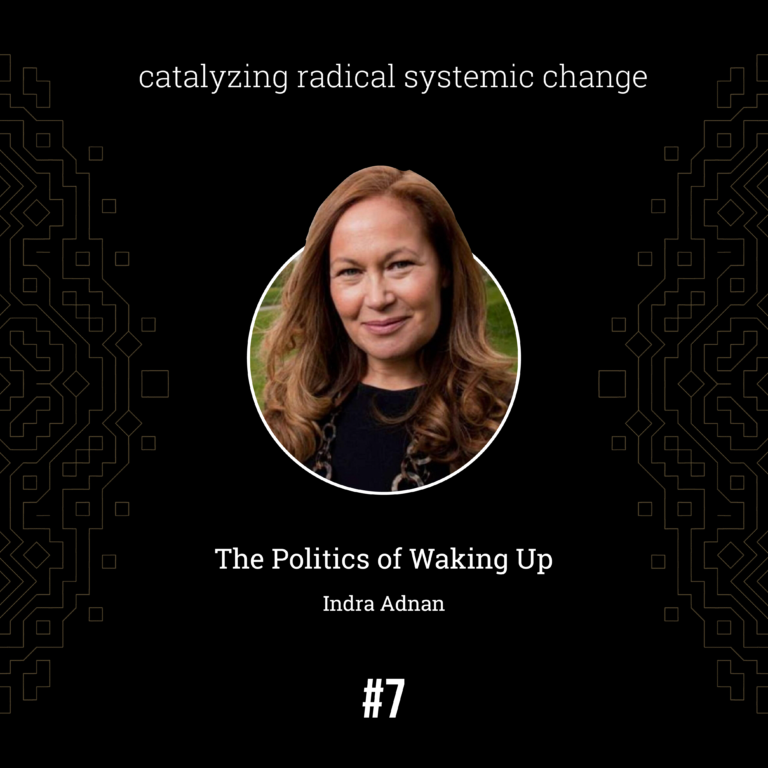 #7 The Politics of Waking Up

What could be a new way to imagine politics?
In this episode we are diving deep into the weeds of Citizen Action Networks (CAN). We reflect how much of the inner worlds we all inhabit, from the trauma we hold, to the memetic center of gravities that steer our perception of reality, to the culture we need to nourish, for a “Politics of Waking Up”. 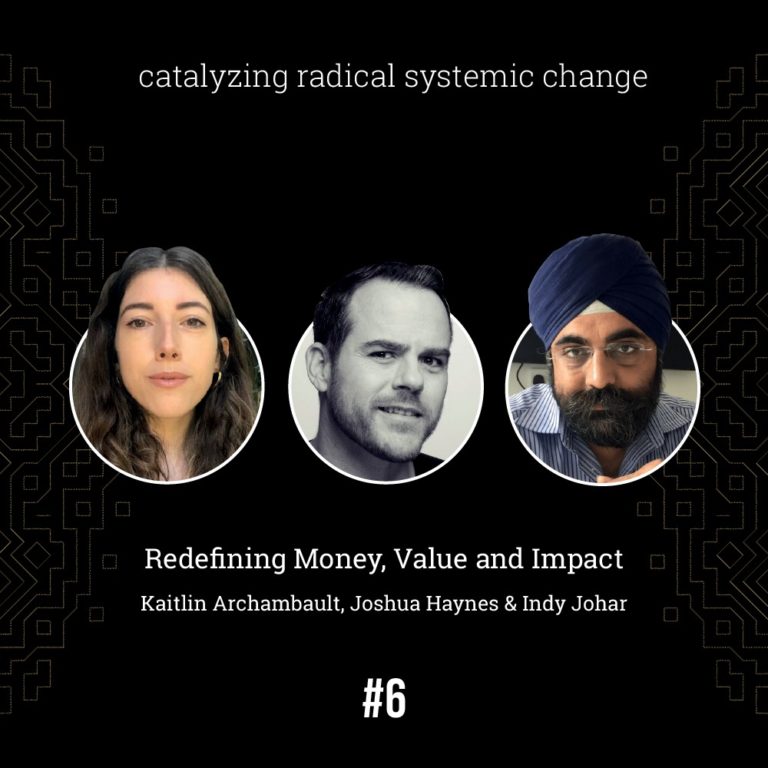 We live in times where it is obvious that the current economic paradigm cannot uphold much longer. In this week’s session we are going to focus on very hands-on examples that redefine impact investing, to ensure that the human factor and wellbeing is counted in, as well as sense into intergenerational investment and new ways to create impact through multi-stakeholder relationships, breaking up the barrier between classical philanthropy and impact investing. 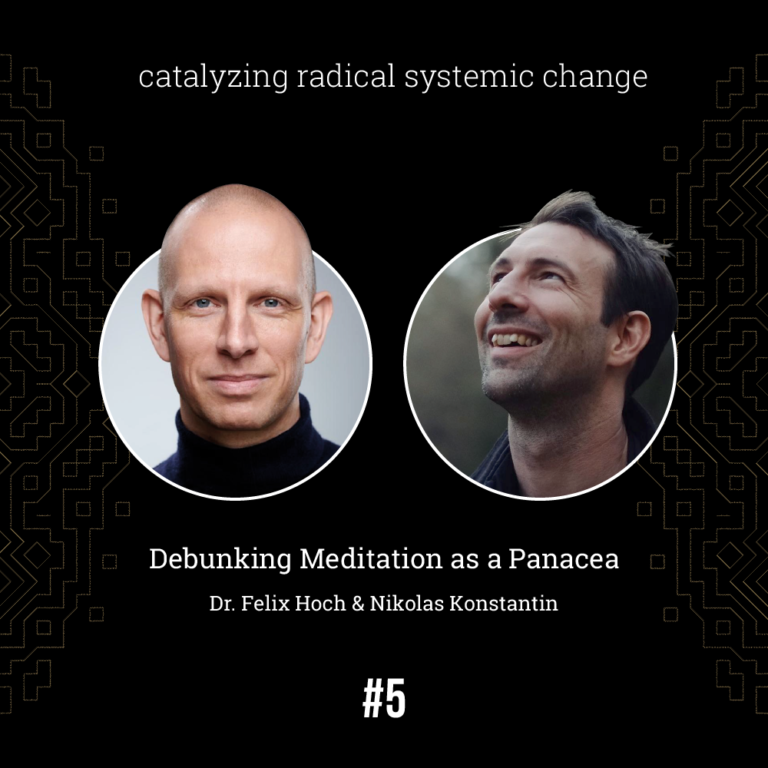 #5 Debunking Meditation as a Panacea for Everything

We are living in a world where meditation has become a commodity and the spiritual market is booming. There is meditation for burn-out prevention, to alleviate stress, to make managers more successful, for better sleeping. It is sold as a panacea for roundabout everything. And exactly that we are going to debunk in this week’s episode. 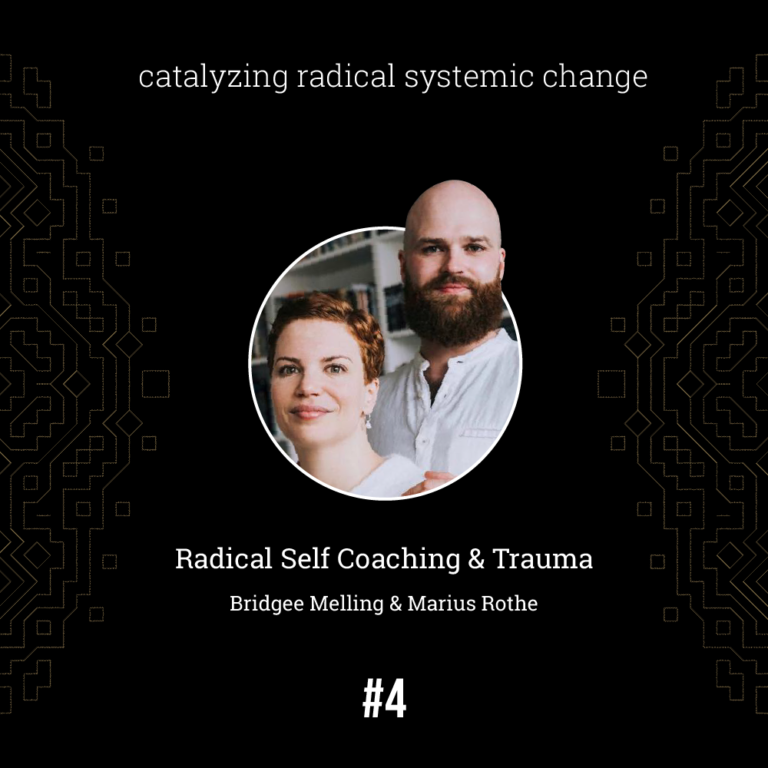 Are we collectively traumatized? Isn’t it that almost all of us hold in our lineage victims and perpetrators of war and genocide? Science tells us that trauma is epigenetically inherited for at least three generations.

Listen Now >
We use cookies on our website to give you the most relevant experience by remembering your preferences and repeat visits. By clicking “Accept All”, you consent to the use of ALL the cookies. However, you may visit "Cookie Settings" to provide a controlled consent.
Cookie SettingsAccept All
Manage consent

This website uses cookies to improve your experience while you navigate through the website. Out of these, the cookies that are categorized as necessary are stored on your browser as they are essential for the working of basic functionalities of the website. We also use third-party cookies that help us analyze and understand how you use this website. These cookies will be stored in your browser only with your consent. You also have the option to opt-out of these cookies. But opting out of some of these cookies may affect your browsing experience.
Necessary Always Enabled
Necessary cookies are absolutely essential for the website to function properly. These cookies ensure basic functionalities and security features of the website, anonymously.
Functional
Functional cookies help to perform certain functionalities like sharing the content of the website on social media platforms, collect feedbacks, and other third-party features.
Performance
Performance cookies are used to understand and analyze the key performance indexes of the website which helps in delivering a better user experience for the visitors.
Analytics
Analytical cookies are used to understand how visitors interact with the website. These cookies help provide information on metrics the number of visitors, bounce rate, traffic source, etc.
Advertisement
Advertisement cookies are used to provide visitors with relevant ads and marketing campaigns. These cookies track visitors across websites and collect information to provide customized ads.
Others
Other uncategorized cookies are those that are being analyzed and have not been classified into a category as yet.
SAVE & ACCEPT

Signup to my monthly newsletter